Skip to main content
Falcon 2019
Falcon 2019 is now deprecated. If you have an existing Falcon 2019 project we are still commited to support you. Please get in touch for more information.
Version: current

DEITY Falcon is a platform agnostic, stand-alone but modular library to be used to easily build decoupled PWA websites.

DEITY Falcon was built with the F.I.R.E. principal in mind:

The main idea that stands behind having separate applications for Client and Server parts is to provide developers/project owners/DevOps with scaling abilities:

Falcon Server itself does not provide any data, but rather acts as a glue for your data extensions. As a result of its work - Falcon Server generates a unified GraphQL Schema that can be used by GraphQL Clients to work with the data.

Falcon Server uses Extension as an abstract layer to work with a specific entity (for example, shop-extension, blog-extension, etc) in order to provide "agnostic" data access and be a platform-independent data provider.

Falcon Extension must define abstract Queries, Mutations and types as a part of Falcon Server API, which will be "stitched" into the unified GraphQL Schema by Falcon Server. All defined methods must be proxied to the assigned Falcon API (defined in Falcon Server configuration).

Falcon Extension uses API as a transport layer to work with a specific back-end service (for example, magento-api, wordpress-api etc), which has to implement all Queries and Mutations methods along with resolved GraphQL Types (data structures) defined by Falcon Extension.

For example, wordpress-api is created as a transport layer for blog-extension, that means that wordpress-api class must deliver all required Queries and Mutations defined in blog-extension GraphQL Schema and match its GraphQL types (Falcon Extension does not care how this data is being fetched and pre/post-processed by Falcon API, it's important to "meet" the schema definition). All optional methods depend on the Extension configuration. 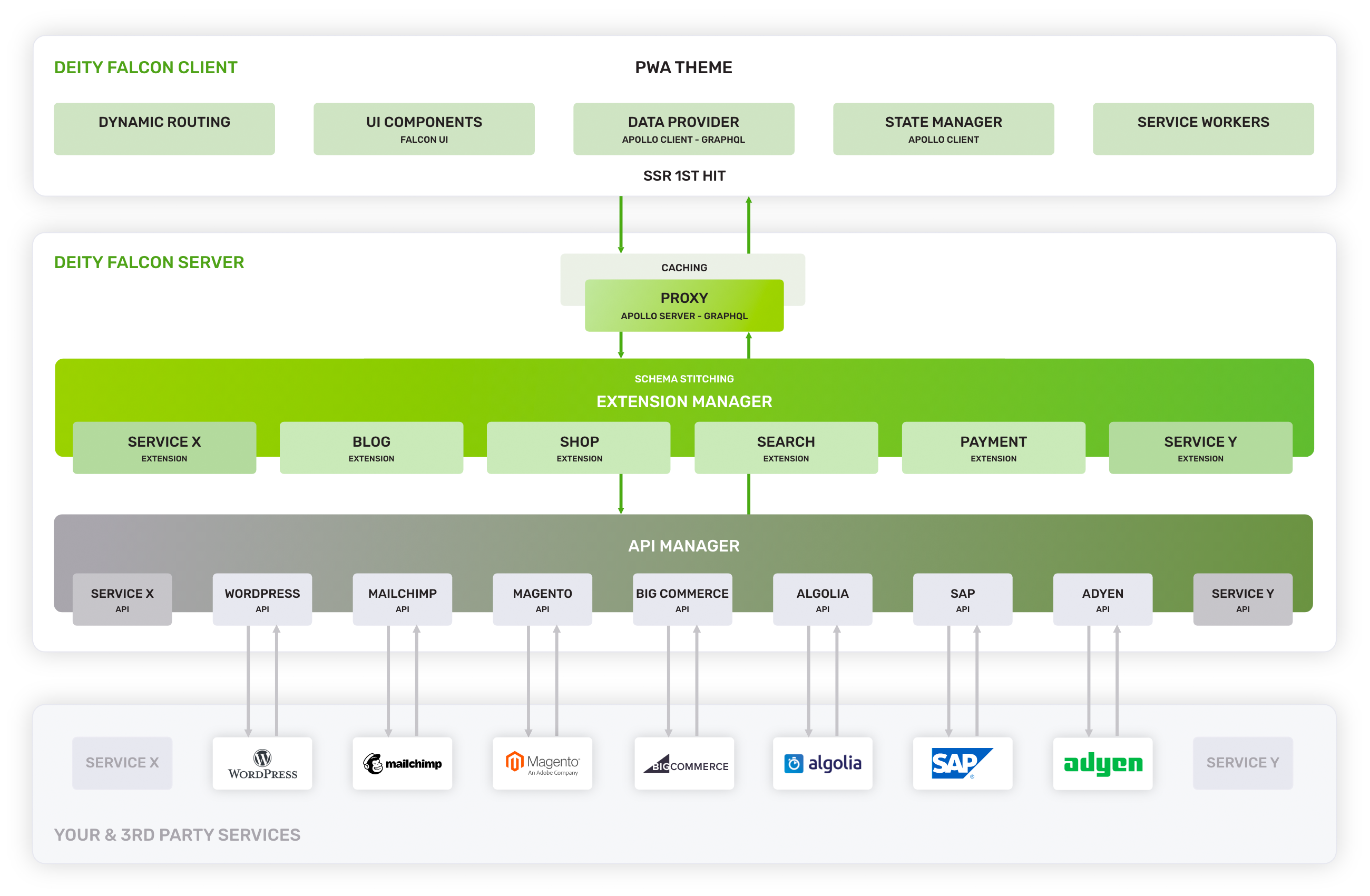 If you can't find what you're looking for, the answer might be on our community slack channel. Our team keep a close eye on this and will usually get back to you within a few hours, if not straight away. If you haven't created an account yet please sign up here slack.deity.io.

Stay up to date

Do you want to be informed when we release new features or fixes? Sign up to our newsletter to stay in the loop.