We have 2 example projects you can start with.

This example will work straight out of the box. It's connected to our example Magento 2 store and wordpress blog. 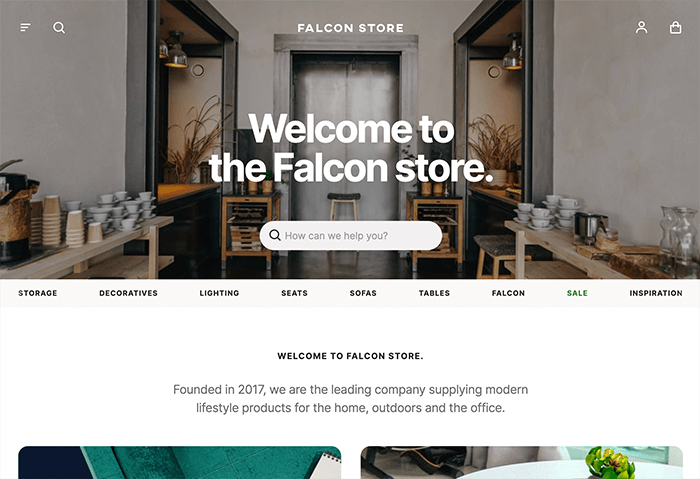 This is our most feature rich example. It requires a BigCommerce, Stripe and Algolia account to get started.

To generate a new application based on Falcon Platform you can use our CLI tool, create falcon app.

By default the demo based on "demo-v2" assumes it's connected to a BigCommerce instance, which uses Algolia and Stripe. Without these credentials the application will not start (you'll see the errors in the console). The old theme will, by default, be connected to our demo Magento 2 and Wordpress instances.

This will generate a Falcon site into a directory with the name of your projects (<project-name>).

If you're an Enterprise customer and running Falcon Server locally you can skip this step and connect to Falcon Server using the default settings.

Before you can start your app you'll need to configure Falcon Client to point to Falcon Server.

Create a local.json file in your client/config/ direcotry. This file is ignored by git and should not be committed.

Add the following code to your local.json file, replacing [YOUR_SITE_URL] with your site URL.

To get your app started you'll need to start (and keep running) Falcon Client.

In a terminal window go into the client directory (cd client/) and run the start command.

Once these have started, visit http://localhost:3000 to see your app.

If you're on an Enterprise plan and have access to Falcon Server you may also want to run this locally.

As well as having Falcon Client running you'll need to open a new terminal window and run the start command in the server directory.

If you can't find what you're looking for, the answer might be on our community slack channel. Our team keep a close eye on this and will usually get back to you within a few hours, if not straight away. If you haven't created an account yet please sign up here slack.deity.io.

Stay up to date

Do you want to be informed when we release new features or fixes? Sign up to our newsletter to stay in the loop.